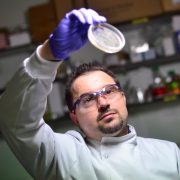 Gene therapy is a method to replace faulty genes with new copies. This is not readily applicable to the treatment of A-T due to the disease gene (ATM) being too large to deliver by the most developed systems using viruses. There are non-viral systems based on nanoparticles that can deliver such large genes, but they are generally poor and the benefit does not last, meaning that gene therapy to molecularly cure A-T will be a very difficult task. This is even more so since the primary tissue for treatment is the brain (Cerebellum) which is difficult to reach even with the most effective systems.

The team have developed a new platform of nanoparticles that can deliver engineered ATM genes to cells in the laboratory. The main aim of this project was to test if this therapy is effective enough in A-T patient cells to correct the sensitivity to radiation caused by the lack of the ATM protein. Also to test the system using mouse models and determine if their system can express genes in the correct part of the brain safely and effectively.

Initially, ATM genes were engineered, and they were able to effectively deliver this to cells in the laboratory. They then tested if these genes could correct the sensitivity by which they compared cells from A-T patients, with those from healthy controls. They were able to show the survival of the patient cells was significantly enhanced with the delivery of the engineered ATM genes using their system; the first aim of the project.

They then tested if the system was safe and effective in delivery of genes to the correct site in mice models, with injection of genes into the cerebellum and visualising where the genes went and if they were active by advanced microscopy. They demonstrated that the nanoparticles engineered were indeed stable and could move withing the fluid of the brain (Cerebral Spinal Fluid); an important demonstration if they aim to achieve wide-spread effect of the therapy. Genes were effectively expressed in the cerebellum and this matched where the DNA itself was located after injection. Several versions of the therapy were tested with one formulation having the best and largest area of activity. The mice appeared healthy and without side-effects with the therapy; this the second aim of the project.

Dr. Dixon and his team have shown that ATM gene engineering is possible, and this can be effectively delivered to A-T patient cells in the laboratory and show positive effects on restoring the normal function of the ATM gene in helping repair DNA after damage. The demonstration that genes can be delivered and expressed in mice brains also confirms the possibility that this approach should be further explored as a potential future therapy.

Publications
A publication is currently in preparation.