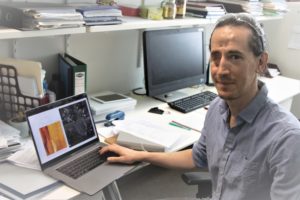 What are the researchers proposing to do?
In a previous study, Dr Sam Nayler and his team performed genetic sequencing on single cells from mini-brains made from A-T patient cells. They have predicted from these data which genes are disrupted in the absence of ATM (the gene missing or not functioning completely in A-T), with a focus on key genes which could be targeted with drugs. However, further analysis is required to understand how the different cell types of the brain are affected, and as a result which drugs might elicit restorative effects, while minimizing side effects.  They will now perform a much deeper analysis of this data aiming to classify the cell types at the highest resolution possible using the latest statistical advances, relevant data in the field and best-current practice. This will enable fine-grained analysis of specific cell types (ie astrocyte, granule, Purkinje neuron) between A-T patients and controls. The team will share these with other interested researchers.  Three major pathways have been identified as being disrupted in A-T minibrains which the team will confirm by establishing cerebellar organoid technology. They will validate these pathways using a variety of biochemical approaches which will form the basis of a testing pipeline for drugs computationally-predicted to restore these pathways. In addition to this work they will also functionally characterize neuronal activity. They will examine the contribution of an important immune cell, the microglia, which has not previously been possible.

Why?
There are currently no effective drugs for treating the neurological symptoms of A-T. This is in part due to a lack of understanding in precisely how cells of the cerebellum degenerate. Through studying the patterns in which genes are expressed in A-T mini-brains in comparison to those made from control donors, it should be possible to determine which malfunctioning parts of the cell cause symptoms in A-T and thus might be targetable with drugs.

How will the research be done?
Using a dataset comprising of more than 20,000 cells from four A-T patients, the team will perform different types of analysis to classify transcriptionally-distinct cell types which comprise cerebellar organoid tissue. Iterative clustering and biomarker enrichment will be performed in addition to curation of biomarkers known to mark specific cell types of the cerebellum. Once cell types have been precisely outlined, statistical testing will be used to derive a list of genes per cell type which are affected in the absence of ATM. These genes will be grouped together to rebuild a picture of the malfunctioning genetic pathways and be used to computationally predict drugs which may help.

How could it make a difference in the lives of those affected by A-T?
The team aim to uncover how specific cell types are affected in A-T and build a model that has discovery and pre-clinical testing capability. Testing of drugs in their cerebellar organoids would provide the first step in exploring the use of drugs which could translate to therapeutic options for A-T patients. Additionally, it is hoped that their system could be used to supplement ongoing clinical trials of a supplement called Triheptanoin in A-T patients.