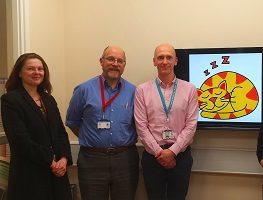 This research project jointly funded with the A-T Children’s Project aimed to understand what happens in the brains of children who have A-T. The Nottingham based team used the latest techniques in MRI scanning to look at the brains of children with A-T with a view to developing biological markers which would measure the underlying disease process and assess whether future new treatments work. Nottingham University were uniquely placed to carry out this research as the UK National A-T Children’s clinic is located  in the city. Due to their proximity to the clinic, the research team were able to recruit more A-T children than would be practically possible in other larger countries, leading to the biggest study of its kind in the world.

Following an initial phase of protocol development (particularly for the measurement of glutathione) the team underwent a data acquisition phase where they recruited, assessed and performed MRI scanning of children with A-T, and a group of matched healthy controls. 50 children aged 6 to 18 years were successfully recruited (26 A-T and 24 without A-T), of which 48 underwent the MRI scan.

Structural imaging was completed in all of the children as well as performing other research sequences. These included magnetic resonance spectroscopy, diffusion tensor imaging, neuromelanin-sensitive MRI, ASL perfusion MRI and resting state functional MRI.  Some data from these sequences had to be rejected due to participant motion, but analysis so far indicates that sufficient data exists to allow novel observations to be made regarding structural and functional imaging measure in paediatric A-T.

The initial findings from the CATNAP study have shown that:

The following article has been published since the project concluded:

The initial findings were also presented at the 2016 A-T Clinical Research Conference, Warsaw.  Presentations on study design and recruitment updates were also given at the 2015 British Paediatric Neurology Association Meeting, Newcastle and at the 2015 Ataxia-Telangiectasia Workshop, Beijing.

The team have continued their studies in an effort to build in their initial findings and in April 2018, Action for A-T and BrAshA-T funded the follow on study entitled Longitudinal brain changes in childhood A-T

An ataxic mouse model of A-T
Scroll to top