An ataxic mouse model of A-T

You are here: Home / NEWS / All Research Projects / Completed Research / An ataxic mouse model of A-T 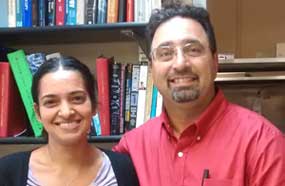 Using an altered approach in adult mice, professor Khodakhah and his team ‘knocked down’ the ATM gene (the gene that is faulty in A-T patients) in the cerebellum. This means that the function of the ATM gene was reduced/changed in the mice.  They found that this knockdown of ATM in the cerebellum may cause ataxia and progressive cerebellar atrophy, two major hallmarks of A-T in humans.

The team believe that ataxia is likely to be caused by the progressive degeneration of Purkinje cells (PCs). PCs reside in the cerebellum and play a crucial role in reliably integrating and transmitting information regarding movement, so their loss causes problems with many aspects of motor coordination.  This project has delivered promising data on a mouse model that will allow researchers to explore ‘why’ loss of ATM leads to degeneration of PCs and ataxia. Specifically, by understanding how ATM maintains the normal activity of PCs, researchers can explore the possibility of preventing PC loss.

While the results presented in this study are promising, they are yet to be published and verified. In the meantime, the team will carry out further tests to determine their efficiency at knocking out ATM and hope to replicate the data using the CRISPR technique.

Studying how genetic factors might reduce the severity of A-T
We use cookies to provide you with a better experience. Further information on our cookie usage can be found here.
Scroll to top