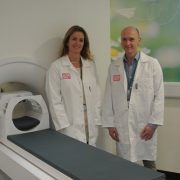 In a previous project, called the CATNAP study, Dr Rob Dineen and team carried out brain MRI scans on 24 children with A-T and 24 children without A-T. They found that measurements on the brain scan were markedly different between participants with and without A-T and some measurements showed a close relationship to the severity of the nervous system problems these A-T patients experienced.

Building on these early findings, the Nottingham based team wanted to understand longitudinal brain changes.  Whether the progression in movement and other nervous system problems is closely matched by changes in the structure of the back part of the brain that controls coordinated movements (the cerebellum) as measured on MRI scans of the brain.  The cerebellum is known to be the main part of the brain to be affected by A-T, but knowing that changes over time are accompanied by changes in the movement and other nervous system problems could be very useful for trials of new treatments for A-T.  In such trials, being able to show that treatments slow or stop the damage to the cerebellum will be extra evidence of a positive effect of the treatment, and that could be helpful in reducing the movement and other nervous system problems.  Lastly, the team wanted to trial whether MRI scans could be carried out in very young children (aged 3-6 years) with A-T.

Due to possible fear of MRI scans for very young children, the team secured the services of a professional play specialist and used the clinic’s replica MRI scanner to carefully prepare the children for the real scans.

The team found that young people with A-T showed a greater reduction in the size of the cerebellum than older children and young adults with A-T.  They found that this early reduction in the size of the cerebellum matched the time at which children with A-T experienced the most rapid increase in problems with movement and other nervous system degeneration.  The data has shown that the cerebellar volume in A-T patients decreases up to the age of 12 years but then stabilises. The team replicated previous data showing the decline in clinical status occurs to a greater extent in early rather than later childhood.  They were also able to show that there was a correlation between changes in cerebellar volume and neurological status.

These findings proved the original research hypothesis that changes in brain MRI metrics reflecting pathophysiological processes in A-T will predict changes in neurological status.  There is potential clinical impact given that the changes on MRI and associated neurodegeneration appear to occur early in childhood (i.e. before 12 years) and therefore certain potential treatments should be targeted at this age group.

Unfortunately, the team struggled to recruit very young children to the study (not helped by recruitment having to end due to the COVID-19 pandemic), and while they found that some young children were happy to have the scan, others did not want to.  This approach may work for future research studies, but clearly clinicians will need to consider each child individually and work closely with the parents / carers to make sure the child is likely to respond well to the preparation for the MRI scan.

Tweets by @ActionforAT
The Big Push 2018