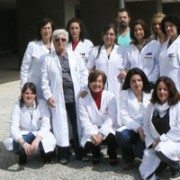 Project Overview
Recent studies have shown that the steroid drug, Dexamethasone (Dexa), can improve some of the neurological symptoms experienced by patients with Ataxia Telangiectasia (A-T). But why Dexa works and how it affects A-T cells is unknown. A better understanding of how, and why, the drug works could help to improve existing treatment or identify targets for new ones.

In order to understand the exact mechanism of Dexa, Professor Luciana Chessa and her team undertook a series of intricate experiments which looked at different processes within A-T cells and compared them to healthy cells.

Project Outcome
Overall, A-T cells showed significant differences in their response to Dexa, compared to healthy cells. The beneficial effect seems to be a result of a reduction in damage to cells, caused by an increase in molecules that protect the cells from harmful molecules called reactive oxygen species.

What Next?
The team hope to use their findings to work towards new and improved ways to treat A-T in the future.

2017 Photo Gallery
We use cookies to provide you with a better experience. Further information on our cookie usage can be found here.
Scroll to top