NEWS
You are here: Home / NEWS / All Research Projects / Completed Research / PCD Mice as an animal model of Ataxia in A-T 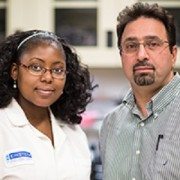 One of the symptoms of ataxia telangiectasia (A-T) is a progressive loss of muscle coordination called ataxia. Unfortunately, no current treatments can prevent this process.

For effective therapeutics to be developed, it is crucial that the biological mechanisms which may cause ataxia are fully understood. The cerebellum region of the brain plays an important role in muscle coordination, where neurons within the deep cerebellar nuclei (DCN) are the main output of movement related information. It is known that ataxia can be caused by the degeneration of a type of neuron, called a purkinje cell, within the cerebellum. It is thought that the information required for muscle coordination is encoded in the activity of purkinje cells and transferred to the DCN neurons. Professor Kamran Khodakhah and his research team aimed to monitor the change in activity of DCN neurons within mice, as purkinje cells degenerate, in order to decipher the ataxia mechanism.

Neurons propagate information by generating electrical pulses. Professor Kamran Khodakhah and his research team evaluated the change in firing rate of the DCN neurons as purkinje cells degenerated. They report that as Purkinje cells were lost in mice, the firing rate became more erratic. Based on these results, Professor Khodakhah hypothesizes that anything that induces an erratic firing rate from the DCN neurons will likely contribute to ataxia in mice (and by extension, humans).

Professor Khodakhah presented this research at the Society of Neuroscience conference in 2013 and at the National Ataxia Foundation’s Ataxia Investigators Meeting in 2014. He plans to publish the results within an international peer reviewed journal once more data is collected.

These exciting results indicate a potential mechanism for ataxia in A-T patients. This mechanistic insight is an important step towards the identification of potential drug targets.

Investigating Connectivity and Neuroinflammation within Corticomotor Networks...
Scroll to top