NEWS
You are here: Home / NEWS / News / Naga wins big on Who Wants to be a Millionaire 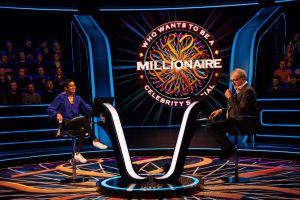 Our amazing patron, Naga Munchetty took part in the celebrity edition of “Who Wants to be a Millionaire” on Saturday 4th January alongside Frank Skinner and Martine McCutcheon.

After breezing through the earlier questions, Naga quickly used up two of her  three lifelines on a  question about the first name of a famous literary doctor before asking host Jeremy Clarkson what he thought. Following his advice, she answered correctly and moved on knowing that she had secured a minimum of £32,000.

The next question asked “What does the letter S stand for in relation to mobile phone SIM cards?” and the answer was subscriber, which Naga had previously ruled out straight away. As she was unsure, she decided not to gamble and walked away with a fantastic £32,000 for Action for A-T.

Sean Kelly, Chief Executive of Action for A-T explained “These funds will be committed to one of our new research projects when our current grant round concludes in February. £32,000 is a huge amount for a small charity like ours and will almost fund an entire project. We are so grateful to Naga for her ongoing and generous support and proud of her efforts under extreme pressure.”

The ATeam: Producing healthcare guidance for children with A-T including the...
Scroll to top