NEWS
You are here: Home / NEWS / All Research Projects / Completed Research / The use of patient stem cell-derived mini-brains to study A-T 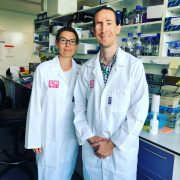 Project Overview
What makes a person with A-T different from you or I? Since the ATM gene was first identified in 1995, numerous teams world-wide have committed themselves to investigating this question. The most debilitating aspect of this disease, the neurological implications, arises from degeneration of the cerebellum. The cerebellum sits at the back of the brain and communicates to most other brain regions, it can be thought of as the control centre to the brain. Why though, does mutation of this gene, affect this brain region so profoundly? Dr Nayler and his team set out to make cerebellar organoids or ‘mini-brains’ from induced pluripotent stem cells (iPSCs) to help answer these questions.

Research Methods
In this project, the team developed the means to manufacture miniaturized versions of patients’ cerebella. This started with a donation of skin, which through collaborators in Australia and the UK, they reprogramed into a personalized supply of stem cells. Each set of stem cells reflects the genetic background of that patient and with these stem cells, they made organoids or ‘mini-brains’ to study A-T. These mini-brains contain all the cells which make up the cerebellum allowing the team to study what makes an A-T brain different to someone without A-T. Simply looking at these mini-brains under the microscope is not enough, the team have pioneered technology to take these brains apart, one cell at a time, and use powerful molecular barcoding and gene-sequencing approaches to examine them one at a time. This they have repeated tens of thousands of times until they gained enough data to run statistical analyses on these mini-brains that can tell them how they are different.  They have now done this with four A-T patients (two Australian and two British), including CRISPR-corrected versions with their Australian collaborators where they used ‘molecular scissors’ to remove the faulty component of the ATM gene and insert a healthy functioning version.

Project Outcome
The team were successful in creating ‘mini-brains’ from induced pluripotent stem cells (iPSCs) as per their aims.  This is the first step in trying to find drugs which will ultimately make these differences disappear. Thanks to the data generated with these mini-brains, it will be possible to use sophisticated computational methodology to predict if there are drugs which will be effective to treat these differences.  The direct clinical impact of this work is some way off as any potential treatments will take many years to research and validate however there is a clear plan from the team going forward as to how this could happen.

A new function for ATM and a new theory for the clinical abnormalities in A...
Scroll to top