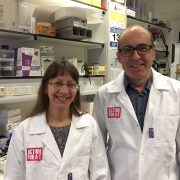 This research project was jointly managed and funded with the US-based A-T Children’s Project.

Project Overview
Ataxia-telangiectasia (A-T), is caused by mutations in the ATM gene.  This research project jointly funded with the A-T Children’s Project aimed to determine how changes in other genes (not the ATM gene) might alleviate symptoms of A-T in cells, with the hope that these changes may have the potential to alleviate A-T patient symptoms.

Research Methods
Work was carried out with cells obtained from patients who, despite possessing inactivating ATM mutations, have strikingly mild symptoms. Having determined the DNA (genome) sequence of these patients, they aimed to identify if there were other mutations (in genes other than the ATM gene) that might alleviate A-T symptoms. Having already “reprogrammed” cells from mild A-T patients into induced pluripotent stem cells (iPSCs), they differentiated them into nerve cells and compared their properties and functions with cells derived from control patients with and without A-T.

Project Outcome
Professor Jackson & team’s work has in the main achieved what they set out to do, to identify suppressors of ATM inactivity both in vitro and in samples from a patient with atypical, mild A-T disease. Understanding these processes has clear future potential therapeutic effects. The first part of the work has identified gene products that could potentially affect the physical symptoms of A-T. This work has already been published (see below).  Having experimentally identified potential modifier genes in experimental models, the team moved on to their second objective using the patient with severely inactivation ATM mutations but with mild disease symptoms. The team used iPSCs from the patient and compared them to healthy matched controls. Unsurprisingly given the mild phenotype, in the patient with mild disease DNA damage signalling in response to oxidative stress was more similar to people without A-T than people with classic symptoms of A-T.

Follow on work form the findings of this project is ongoing.  There is planned collaboration with the team in Oxford (Dr Sam Nayler) in order to specifically look at the cerebellum in relation to the findings described above.

Publications
There are no related publications at present, but we expect to see future publications relating to this and ongoing work.

What next?
Ongoing work may well provide the opportunity to influence future treatment of A-T in the long-term future.

New Collaborative partnership between the A-T Society and BrAshA-T Ataxia T...
We use cookies to provide you with a better experience. Further information on our cookie usage can be found here.
Scroll to top