You are here: Home / NEWS / All Research Projects / Ongoing Research / Further development of CRISPR/Cas Genome Editing as a Treatment for Ataxia... 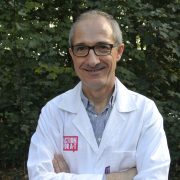 What are the researchers proposing to do?
Following the completion of their original study, the Royal Holloway based team led by Professor Rafael Yáñez-Muñoz identified three possible genome editing strategies to target ATM, with the goal of achieving therapeutic correction of ATM mutations. Having implemented these three strategies with varying success in human cells and A-T patient cell lines they concluded that two approaches were worthy of more detailed exploration.

Why?
Mutations in the ATM gene affect the production or the activity of the ATM protein, leading to the symptoms associated with A-T. Fixing the faulty gene permanently will give the cells a chance to produce the correct protein. In the last few years, CRISPR has revolutionised the field of genome editing and shown remarkable success in progressing treatments for many genetic diseases that also rely on the correction of faulty genes. The team have therefore decided to use CRISPR in an attempt to repair ATM mutations.

How will the research be done?
Following on from their initial findings, the team will undertake various experiments using Hematopoietic Stem and Progenitor Cells (HSPCs) with a view to  disrupting a specific ATM mutation (5763-1050A>G) and attempting to repair the mutated cell (103C>T) using synthetic oligonucleotides.

How could it make a difference to the lives of those affected by A-T?
Currently, there are no treatments for A-T, and this project aims to pave the way for future gene and cell therapies. If successful, these focused strategies could lead to personalised therapies targeting individual A-T mutations or even generic A-T treatments. The latter could offer essentially off-the-shelf treatments for most A-T mutations. Additionally, genome editing leads to stable genetic modification which could provide a one-off therapy, not requiring repeated administration of chemicals with potential acute or chronic side-effects.

Tweets by @ActionforAT
Assessment of the frequencies and types of cancers in occurring in A-T pati...