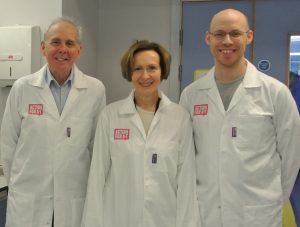 Patients with Ataxia Telangiectasia (A-T) have an increased risk of developing blood cancers. These patients do not have a protein called ATM which is important for response to chemotherapy treatment. Consequently, when receiving chemotherapy for their blood cancers A-T patients experience substantial toxic effects. Therefore, new less toxic, blood cancer-specific therapies are highly needed.

Professor Taylor and his team developed a mouse model in which new treatments could be tested. This model lacked the Atm protein and had reduced development of T cells, a combination which allows them to develop a variety of blood cancers that occur in human A-T patients. Upon investigation of these blood cancers the team noted that a protein called c-Myc is particularly active in cancer cells. In this study the team aimed to explore different ways of suppressing the action of c-Myc.  They also wanted to test whether the addition of small molecules that inhibit c-Myc can stop cancer progression, and if these molecules could be used in combination with low doses of chemotherapy.

The first objective, using a technique ‘in-vitro’ (experiments performed outside of a living organism such as in a test tube/petri dish), looking at inhibition of tumour cell lines (by inhibiting c-Myc) was successful. The team found inhibiting several specific pathways within the c-Myc protein particularly effective, including inhibiting Aurora kinase B, BET and mTOR. The team were also able to look at combinations of inhibitors that might have a synergistic effect.

For the second phase of testing ‘in-vivo’, modifications of the project had to be made as there were insufficient mice with blood cancer to test all the treatments identified in-vitro.

The team were able to test certain inhibitors and were able to use a slightly different mouse models in bigger numbers. BET and mTOR inhibition showed particularly effective tumour inhibition. The research team recognise the need to carry out further inhibitor tests in more mouse models to make further final conclusions.  In the medium term, this work provides the basis to potentially develop more treatment options for one of the commonest malignancies seen in A-T patients.

A publication is currently being prepared.

The David Peake Study to test the feasibility of whole-body MRI for cancer surveillance...
Scroll to top