NEWS
You are here: Home / NEWS / All Research Projects / Ongoing Research / A new function for ATM and a new theory for the clinical abnormalities... 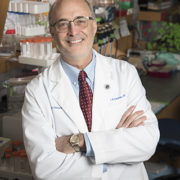 What are the researchers proposing to do?
A-T is caused by mutations in the ATM gene and results in progressive neurodegeneration, greater susceptibility to cancer, immune deficiencies, and other clinical manifestations. While much is known about the roles of the ATM protein in cells, definitive explanations for the clinical abnormalities in A-T patients remain incomplete. Thus, effective approaches to minimising these clinical problems remain limited. Professor Kastan’s lab recently discovered a new function of the ATM protein in repression of the RNA* surveillance factor SMG1 activity in the setting of DNA damage. As a result, they are proposing to characterize how ATM is involved in the regulation of SMG1 activity and determine the effects of SMG1 regulation on A-T phenotypes.

*RNA (Ribonucleic acid) is an important biological macromolecule that exists in all biological cells.  It carries the messenger instructions from DNA.  DNA contains all the genetic instructions for the development and maintenance of life.

Why?
The SMG1 kinase was originally described as a protein involved in identifying and reducing abnormal or inappropriate RNA molecules through RNA surveillance. Abnormalities in RNA surveillance have been associated with neurodegeneration, oxidative stress responses, aging, inflammation, and cancer, like many A-T phenotypes. The lab has recently found that ATM is responsible for repression of the SMG1 kinase after irradiation, and SMG1 belongs to the same protein family as ATM. As a result, Professor Kastan and his team are investigating the link between ATM and SMG1 to determine how ATM affects SMG1 function. They aim to define how ATM regulates SMG1 and will explore whether altered SMG1 modulation after DNA damage contributes to A-T phenotypes.

How will the research be done?
The team will attempt to identify how ATM regulates SMG1 by mapping which areas of the SMG1 protein are affected by ATM activity and exploring proteins regulated by ATM that affect SMG1 kinase activity. As SMG1 was initially described as a factor involved in reducing inappropriate RNA, they will identify what RNA molecules differ with SMG1 loss in A-T cells. Finally, they aim to address how SMG1 could potentially drive some A-T phenotypes, including defining the role of SMG1 in oxidative stress responses as well as inflammatory responses.

How could it make a difference to the lives of those affected by A-T?
As effective approaches to mitigate the clinical manifestations in A-T remain limited, the team aim to define how SMG1 functions are altered in the setting of ATM deficiency. They will explore the possibility that the inability to repress SMG1 activity could contribute to A-T phenotypes. As a result, demonstration of the importance of ATM repression of SMG1 activity would lead to novel avenues of research to approach targeting A-T clinical phenotypes.

Assessment of the frequencies and types of cancers in occurring in A-T pati...
Scroll to top