Ataxia Telangiectasia (A-T) is caused by a fault in a gene called ATM (Ataxia Telangiectasia Mutated), which encodes the ATM protein. This protein’s involvement in the regulation of the cell cycle and repair of DNA damage is well known. Recent evidence suggests that ATM is also involved in a process called autophagy which destroys unnecessary and dysfunctional parts of cells. If disrupted, this process can lead to the accumulation of waste material within the cell, which has been cited as a cause of neurodegeneration in Alzheimer’s and Parkinson’s disease. Past research on cells from A-T patients has indicated that, due to the functional defects associated with a faulty ATM gene, the autophagy process doesn’t work properly. Professor Pignata and co-workers’ research aimed to identify the responsible mechanism as this is crucial for the development of new therapeutic strategies.

Autophagy involves the fusion of two cellular vessels, called autophagosomes and lysosomes, to form an autolysosome. Professor Pignata’s research group studied this process using white blood cells isolated from A-T patients. They found that the expression level of two genes (Vps11 and Vps18) responsible for vessel transport were lowered, disfavoring fusion. Electron microscopy confirmed this, showing an accumulation of autophagosomes and depletion of the fused autolysosomes. For instance, the concentration of autophagosomes was 6 times higher than expected in healthy cells. Whilst, the concentration of autolysosomes was half that expected. These results confirm that, due to the fusion mechanism being disrupted, autophagy is abnormal in A-T white blood cells.

Previous studies have shown an improvement in neurological symptoms for A-T patients after treatment with a steroid called Betamethasone. Further work by Professor Pignata’s research group has shown that Betamethasone results in autophagosome degradation. This suggests that the accumulation of autophagosomes is a source of neurodegeneration in A-T patients.

These exciting results indicate a potential target for future drugs and therefore provide a new opportunity for treating A-T. 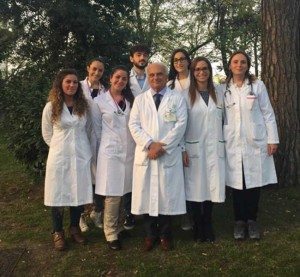