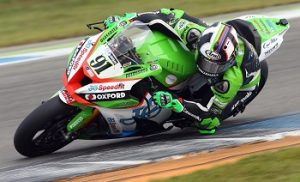 Leon, son of “Rocket” Ron Haslam, is currently riding for Honda in World Superbike Championship and has also previously competed for Kawasaki, BMW, Aprilia, Suzuki and Ducati. In the 2010 World Championship Leon came close to winning the title, finishing 2nd overall whilst riding for Suzuki. Leon signed off the 2015 season with a victory with his Aprilla team at the final World Championship race of the year in Qatar. In 2016 Leon returned to the British Superbike Championship after signing with the factory Kawasaki team, finishing runner-up. He treated fans to a brilliant season-long title battle in 2017 leading the championship until the 12th and final round where brake failure saw him crash out at 173mph, eventually finishing third in the series. He then dominated the 2018 season, winning 15 of the 26 races to win the British Superbike Championship.’